The 90-year-old wholesale market in Ho Chi Minh City’s District 6 had dramatically deteriorated after nearly a century in use, prompting authorities to shut it down in November 2016 for a major restoration project.

After two years, work is set to be completed in a week or so, following which the district’s project management unit will carry out a full inspection before giving the go ahead for the market to reopen next month.

The repair and restoration work is estimated to have cost more than VND104 billion ($4.66 million). The city plans to collect payments from tenants over the next 10 years.

Many parts of the market including its tiled roof, pillars, stairways, banisters, floors, walls, and main entrances have been upgraded. Public restrooms and a room for electricity generators are among the additions.

The facelift has retained the market’s original architecture and features like the bas-reliefs of dragons, the phoenix, and the clock tower, said Nguyen Anh Viet, vice chairman of the project management unit.

The entire 11,000-square-kilometer roof has been replaced with new tiles of similar sizes and shapes as the original, sourced from neighboring Binh Duong Province.

The late delivery of tiles has been blamed for the slow progress of the project.  This is why the project is a year behind schedule, Viet explained.

Currently, scores of workers are still working hard, from dawn till dusk, on the roof and other areas.

At the main gate on Thap Muoi Street, two sets of stairs leading to the upper floors have been decorated with the original design unchanged.

The interior of the market has been painted with a new color. Over 1,000 stalls have been rebuilt, installing fire safety equipment, sound systems, safer electrical wiring and a wireless internet network.

During the restoration work, erstwhile traders had to move to a temporary market right in front of the old one on Thap Muoi Street, where stalls were open for business from 6 a.m. until 7 p.m. every day.

Binh Tay Market was built in 1928 by a rice trader from China. The 25,000-square-meter market is appreciated for its bagua-shaped design. Bagua is a Chinese religious motif that incorporates eight trigrams including the sky, fire and wind that are arranged in a circle symbolizing yin and yang.

The market, famous for its clock tower and a central courtyard, used to receive more than 120,000 foreign visitors every year before it was closed for repairs. 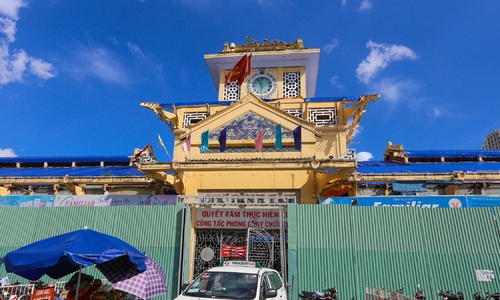 Chinatown market to reopen in Saigon after two years

Da Nang rises further as a choice global destination of 2019

Taking an eco-bus around Saigon

Workout Routine for Big Forearms and a Crushing Grip